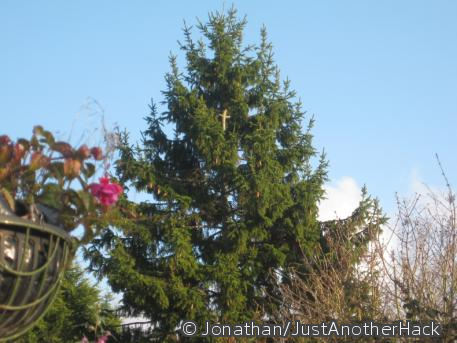 When I was taken into hospital earlier this year, I had a number of ‘coincidences’ occur which normally I would shrug off however they are bothering me and I wanted to outline them here.

I have always had what one could term a ‘spiritual side’ to my nature. ‘Belief’ has always held a fascination for me. I was happiest within that as a teenager when I discovered Paganism and then Shamanism. I was unhappiest when I explored the Abrahamic faiths.

I need to take you back to 2009. My birthday actually that year. I was sitting in my garden, camera in hand photographing nature around me. I was thoroughly depressed and frankly, wishing to die. I asked ‘God’ if he/she/it/they existed and in that moment, a brilliant shaft of light came through the clouds above and illuminated the fir tree in next door’s garden. A very clear outline of a golden cross shone out, which I quickly photographed and have included below.

It took my breath away. It was only in the tree for a minute or so. I went back outside every day for weeks trying to see it again but nothing occurred. So what did I do? I went back to organised religion and was once again, miserable. Christians are not pleasant people in the main. I stayed within that nonsense for a further 8 years. What a waste of time, effort and energy. I genuinely felt God had answered my prayers in an incontrovertible way.

I eventually left and put all such things to one side.

Then this year happened. I am taken into hospital with suspected gastroenteritis and it was soon discovered I had blood clots in my stomach which had caused a small section of bowel to die. I had 2 bowel resections, during which time I was in Intensive Care. When it was made clear to me the severity of my situation (my mother had been told to ‘be prepared’ as I was taken down for my first operation) I prayed. I did so sceptically. I simply asked if there was a God, and would he/she/it/they reveal themselves to me again incontrovertibly to notify me of its existence?

I was ventilated for several days then taken off it and so I began my recovery. I was assigned a nurse who dealt just with me as a patient. Each bay containing a bed had a designated nurse looking after them. All of mine were Christian. Every single one of them. Many were from overseas. When I was able to, I would chat with them and as religion/spirituality was still important to me asked if they held any religious convictions. What was interesting was that many hadn’t planned on becoming nurses, they just seemed to find themselves heading in that direction. Quite a few were brought up within other faith systems or structures yet felt the calling to be Christian.

I was eventually put into a side room. Still within Intensive Care and still with one-on-one care however I was deemed no longer clinging to life and to free up the ward bed for someone who needed it more desperately than I did. I met with other nurses I hadn’t as yet met or so I thought at the time. It was one of these who said to me:-

“Hi Jonathan, how are you feeling today?”
“Getting there” I replied.
She said “You don’t remember me do you?”
I told her that I didn’t.
She told me that she was the very first person who had spoken to me when I came into ICU.
I apologised and she smiled and said “Don’t worry about it.”
I then said “I’m sorry, I don’t know your name?”
“That’s okay” she responded. “Madonna.”
I was incredulous. “Your name is Madonna?” I enquired.
“Yes” she said.
“Are you Catholic?” I asked.
“I am” she said.

I then discovered I had been looked after when I came into ICU by a nurse called Mary. I vaguely remembered her. Madonna and Mary.

Aside from a certain pop singer and it’s not even her given name, I have never known anyone in my life who was called Madonna and what were the chances of being looked after in the same ICU by a Madonna and Mary? I then remembered my prayer. Was I being shown something? All I could think of was the evils perpetrated in the name of Catholicism. That and the fact the Vatican had become a vaccine hub during the recent couple of years, some of the said vaccines containing human fetal tissue.

I left that ward and was taken down to another ward, still for people who are critical but no longer deemed to have life-threatening conditions. I was introduced to a nurse who immediately told me she was a Christian. She gave me her testimony. When she became Christian. What made her to do so. The exact date of her conversion and how her life had been subsequent to that. She launched straight into it. My mother was beside me. She didn’t introduce herself or ask after us, just straight into the story of her life as a Christian. Why had that happened? Did she do that to everybody who is new to the ward? I discovered she didn’t. Why me then?

This has all been very puzzling to me. I compartmentalised it until very recently.

I then found out the names of the people who performed my operation. Their names translated to ‘Light’ and ‘From the Sun.’ “Here we go again” I thought. The last person I had contact with at the hospital before being discharged from their care, her name was Mistry. I took that to be Mystery and so I began looking up Light Mystery (Light Mysteries relates to the Rosary) which lead me back to Catholicism. The Madonna and Mary connection. Also, I was born in 1973 and the Catholic bible contains 73 books. I steer clear of 66 books because I think that number of books approved of by ‘the powers that be’ is there for a reason. 666 and all that.

Then I thought “Hang on, what does Mistry mean as a surname?” It translates as Carpenter. Joseph and Jesus were both Carpenters. I am a J.J. Jesus died at 33. I was born on the 12/12 which reduces to a 33. The nurse who drew my bloods that day was a Catholic and attends the same church my Stepdad had done while he was alive.

All I can think of is the evils perpetrated by the Christian church throughout the ages. I can’t get past that in my mind. Yet I am seemingly being drawn in this direction. There are far too many coincidences. I have heard of people converting to Christianity with far less examples of what they believe to be Divine Intervention happening in their own lives that have led them to that point.

I don’t know what to do.

The bible is a terrible book. I don’t like Christianity as a religion. Am I being led to Gnosticism I wonder? Or am I being led back to mainstream Christianity? If so, what possible reason could God have for me there? I will be miserable again.

Anyhow, this is where my head is at currently.